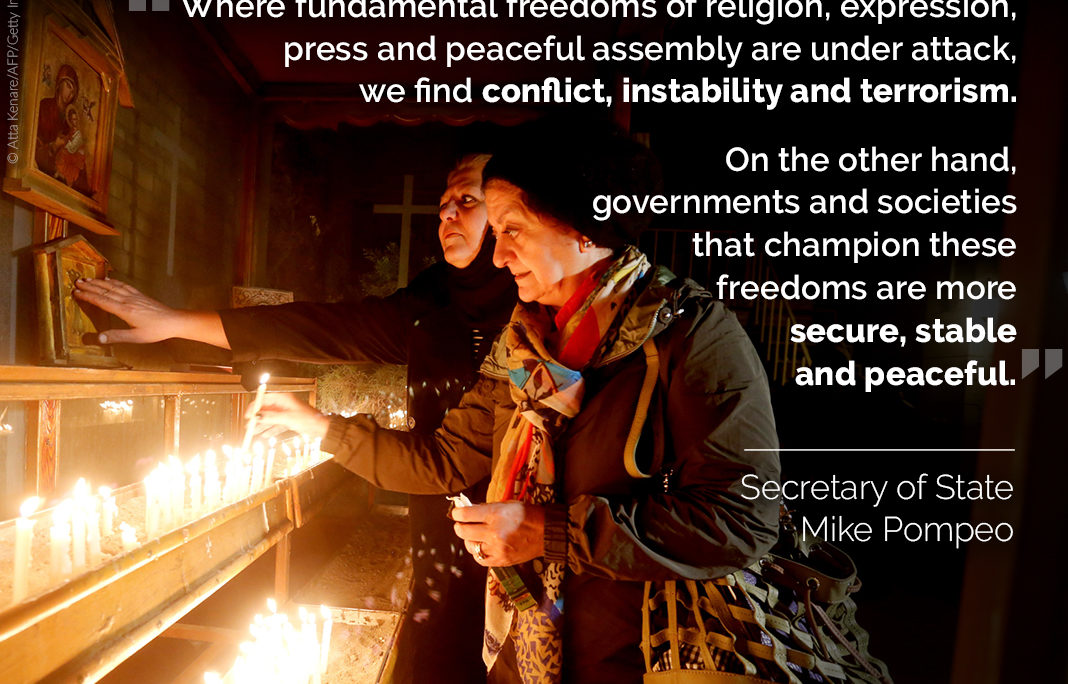 An Iranian woman lights a candle during Christmas Eve mass at the St Joseph Armenian Catholic church in Tehran on December 24, 2016, as Christians around the world are celebrating Christmas. / ATTA KENARE/AFP/Getty Images

The International Religious Freedom Report 2017 is available on State.gov and allows access to all separate sections as well as the creation of a custom report.
This report covers the period between January 1 and December 31, 2017.

In 1998, Congress overwhelmingly passed the International Religious Freedom (IRF) Act –groundbreaking and bipartisan legislation that affirmed the importance of promoting international religious freedom as a key aspect of America’s foreign policy. President Clinton signed it into law on October 27, 1998. This law created the position of IRF Ambassador at Large to lead the U.S. government’s efforts, as well as an IRF Office.

Promoting and defending religious freedom is a priority for this Administration. To elevate the effort to ensure that everyone is able to live in accordance with the dictates of their conscience, Secretary Pompeo will host the Ministerial to Advance Religious Freedom in Washington on July 25-26. We will convene government and religious leaders, rights advocates, and civil society from around the world to discuss challenges, identify concrete means to push back against persecution and discrimination, and ensure greater respect for religious freedom for all.

Drawing upon the issues and concerns outlined in the annual Report, U.S. officials formulate policy responses, including diplomatic engagement or foreign assistance programs to address abuses and violations of religious freedom in foreign countries. The reports also inform the Secretary of State’s religious freedom designations.

Over the years the audience for the Report has continued to grow. Today, it is used by a multitude of domestic and international audiences, including the U.S. Congress, academic researchers, foreign governments and legislators, human rights advocates, religious communities, and citizens seeking to better understand the actions regarding religious freedom of governments around the world.