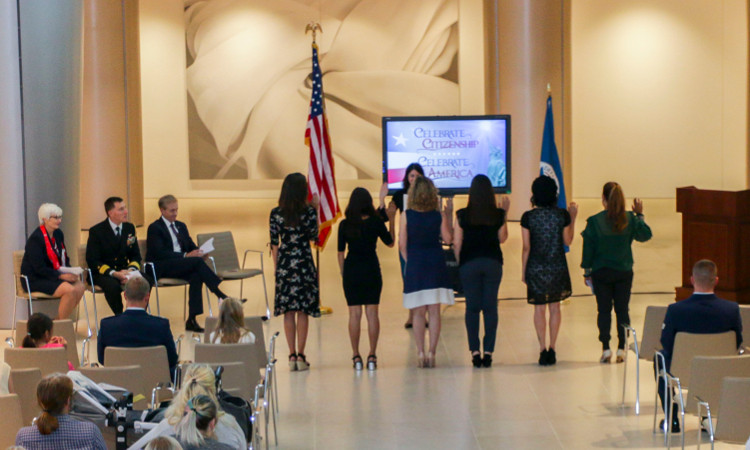 The only people who can naturalize overseas are active duty members of the U.S. military during a designated period of hostility, and spouses of members of the U.S. armed forces who are residing abroad on official orders. This ability to naturalize overseas is in recognition and gratitude for military members who defend our country even before gaining the rights and responsibilities of a U.S. citizen, and for military spouses who provide vital support to their families and communities committed to a life in the military.

In the last decade, the London office of USCIS has naturalized 204 individuals through these two military naturalization programs. Typically, USCIS London performs the naturalization ceremony at U.S. military bases in the UK.

The candidates for naturalization – six spouses of active duty U.S. military members stationed in the UK – entered the ceremony as citizens of a foreign country and exited the ceremony as America’s newest citizens. USCIS Field Office Director Rebecca Tanner administered the Oath of Allegiance for the six individuals to become U.S. citizens.

The ceremony ended with two children of the new U.S. citizens leading the Pledge of Allegiance.

Below: Ceremony pamphlet showing the text of the U.S. Oath of Allegiance: