All appointments are scheduled at the Embassy of the United States of America, 33 Nine Elms Lane, London, SW11 7US.

To reach the U.S. Embassy, we recommend traveling by public transport as there is no public parking available.

From Vauxhall, it takes approximately 10 minutes to walk to the Embassy; proceed from Vauxhall Tube station Exit 1 for a riverside walk or from Exit 4.  Alternatively, the Embassy is two stops by bus 156, 344, or 436 from Vauxhall Bus Station, Stop E, to Elm Quay Court.

Use our Walking Map (image, opens in new window) to guide you.

If you are a Consular visitor please see the access guidelines thus:

Other visitors should note that electronic devices such as laptops are not allowed within the Embassy grounds. Please see this list (PDF) of prohibited items and storage facilities within the vicinity of the Embassy building in Mayfair. 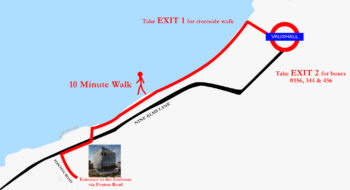 Walking Route from Vauxhall station to the U.S. Embassy London

Large bags/suitcases (above cabin baggage size) and laptops cannot be admitted to the Embassy. Other items that cannot be brought into the building include perfume and cologne (above 30ml), weapons and glass bottles.

Prohibited items cannot be stored at the Embassy so leave them at home or store them securely before you arrive. Left luggage facilities are available for a fee at several airports, coach stations, and mainline train stations, including Waterloo and Victoria.

Those requiring assistance should make themselves known to the security guards at the gate. Please note any special requirements thus:

Robert Wood Johnson was sworn in as the U.S. Ambassador to the United Kingdom at a ceremony with President Trump and Vice President Pence at the White House, August 21, 2017.

The Ambassador, or Chief of Mission, is the highest ranking American official in the United Kingdom.  The position’s full title is “Ambassador Extraordinary and Plenipotentiary”. It is “extraordinary” in that the Ambassador is the personal representative of the President of the United States to Her Majesty the Queen.  The “plenipotentiary” in the title indicates full power to negotiate.  As well as being responsible for the work of the various sections of the Embassy, the Ambassador coordinates the activities of all departments and agencies of the United States Government with representatives in Britain.

The Deputy Chief of Mission is Yael Lempert.

Assisting the Ambassador is the Deputy Chief of Mission (DCM), a position carrying the rank of Minister. The DCM is responsible for the day to-day running of the Embassy and also undertakes high-level representation, negotiation, appraisal, and reporting duties.  In the Ambassador’s absence the Minister becomes Chargé D’Affaires, thereby assuming all the Ambassador’s functions and responsibilities.

A list of websites for U.S. Embassies, Missions and Consulates is maintained by the U.S. Department of State at www.usembassy.gov

A Google maps search for “"us embassy london nine elms london" will yield the correct location in front of the new building.