A measure of the growing confidence of the newly-independent United States was the large number of consulates it established during the closing years of the eighteenth century. President John Adams appointed the first U.S. Consul to Scotland on July 14, 1798. The Consul was Harry Grant from South Carolina – an appropriate choice, considering that state’s strong Scottish heritage. The first known address for the Consulate was 1 James’ Place, adjoining Leith Links — the street now known as Links Gardens.

The second Consul, Joel Hart of New York, took over in 1818. Almost immediately, he moved to London to work as a physician, returning to America within five years. He held the post of Consul for Leith for sixteen years, as the U.S. State Department was unaware of his departure. Indeed, it seems that his only official act was to appoint a Vice Consul, who was left to conduct the affairs of the Consulate. This first Vice Consul was Robert Grieve, a local ship chandler with premises on the shore of Leith.
The next Consul, John Broadfoot, was also a local man, belonging to a firm of general agents and ship brokers in Leith. Likewise, his successor was a Leith merchant and agent, James McDowall, an American, from Ohio. He was succeeded in 1861 by another American with a Scottish sounding name – Neil McLachlan from Indiana, who signed himself “United States Consul for Leith and its Dependencies”.

After fifty-six years in Leith, the U.S. Consulate crossed into Edinburgh in 1854, but it moved back to Leith in 1861. Ten different homes scattered around Leith followed, though the Consulate finally settled in Edinburgh in 1883. It moved into its present premises on the stately Regent Terrace in 1951. All seven consuls appointed since the 1990s — Bobette Orr, Julie Moyes, Cathy Hurst, Liane Dorsey, Cecile Shea, Lisa Vickers and Dana Linnet, have been women, after an unbroken line of forty men.

One of the most public and widely-appreciated acts by a U.S. Consul was made by the splendidly named Wallace Bruce in 1893, when he unveiled in the Calton Cemetery a striking statue of Abraham Lincoln bestowing freedom on an African American slave. The statue commemorates Scottish soldiers who fought during the American Civil War, six of whom are buried in the Calton Cemetery.

But there is another connection between President Lincoln and Scotland. In 1870, the widowed Mary Todd Lincoln traveled to Scotland to visit the Deputy Consul, Rev. Dr. Smith, who had been her hometown minister in Springfield.

In 1959 President Eisenhower visited Scotland and stayed at Culzean Castle in South Ayrshire. A suite of rooms at Culzean was gifted to the President in appreciation for his leadership in the battle for Europe. For Eisenhower, Culzean was a place to relax, play golf, paint, and walk. He returned during retirement. 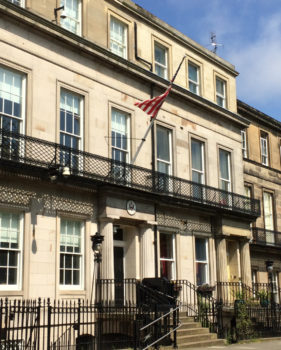 The U.S. Consulate-General in Edinburgh, Scotland

The darkest days of the Consulate’s history took place just before Christmas in 1988, when a jumbo jet exploded over Lockerbie. The Consulate’s American officials and local staff raced to the scene and worked there, along with hundreds of Scots, for months to assist and comfort the victims’ grieving families.

In 1995, the Consulate was slated for closure after deep cuts were made to the State Department’s budget. The outpouring of support from Americans and Scots alike surprised many. Former Presidents George Bush and Jimmy Carter joined the campaign. Just days before the scheduled closure, the Consulate won a reprieve.

In 2005, Scotland hosted the G8 Summit at Gleneagles in Perthshire. President George W. Bush was among the many world leaders present for this event.

The U.S. Consulate General in Edinburgh has witnessed many changes in its 200 years. It enters its third century proud of the tremendous relationship between two great nations and hopeful for the future.

History provided with the assistance of Edinburgh Historical Enterprises: