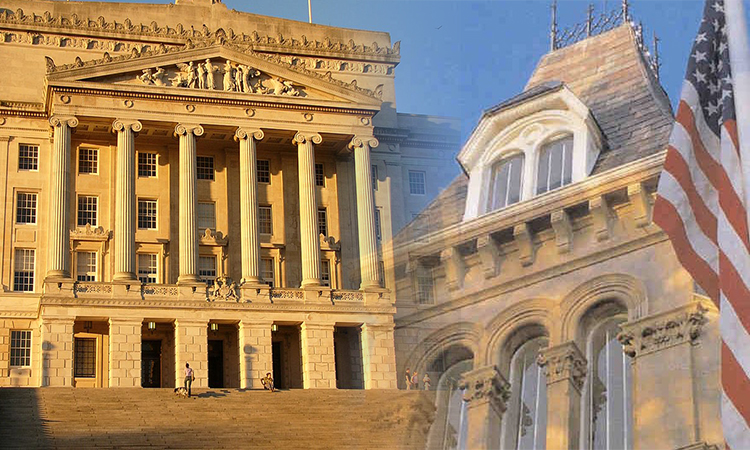 August 03, 2020
On the Death of John Hume
The United States is deeply saddened to learn of the passing of John Hume, a leader whose integrity and courage played a profoundly important role in Northern Ireland’s transition from violence to peace.
Throughout his career, John Hume believed that just and lasting political solutions could only be achieved through peaceful means, and as a central architect of the Belfast / Good Friday Agreement, he worked tirelessly to make these aspirations a reality.

March 11, 2020
Announcement of Mick Mulvaney as Special Envoy to Northern Ireland
U.S. Special Envoys have facilitated the negotiation and implementation of the Belfast/Good Friday Agreement, which had the main goal of bringing an end to violence, and ensuring self-determination, peace, and reconciliation. To that end, the U.S. Administration remains fully committed.

November 01, 2017 Statement on Northern Ireland Power-Sharing Talks  The United States regrets that, since March 2017, the main parties remain unable to reach agreement to form a regional power-sharing government in Northern Ireland. As such, the United States recognizes the UK government may be compelled soon to legislate for a regional budget covering the rest of the fiscal year.

July 05, 2017 The United States Urges Establishment of a Power-Sharing Government in Northern Ireland “The United States regrets that the political parties in Northern Ireland have not yet reached an agreement to establish a power-sharing regional government following elections in March.
We urge the region’s two largest parties, the Democratic Unionist Party and Sinn Fein, to continue their discussions with the aim of forming an effective, responsive, and representative government as soon as possible. All of Northern Ireland’s political leaders share a collective responsibility to build on the political and economic progress made since the 1998 Good Friday Agreement and to construct a better, shared future for all of Northern Ireland’s citizens.”

March 21 ,2017 State Department on the Passing of Northern Ireland’s Martin McGuiness   “First, we were saddened to learn of the passing of Martin McGuiness. As deputy first minister of Northern Ireland, McGuiness worked to make the power sharing in government a cornerstone of consolidating peace and building prosperity in the region. In making difficult decisions to move away from militancy, McGuiness worked to end violence and promote cross-community reconciliation. ”

March 15, 2017  Remarks by  Vice President Pence to the American Ireland Fund National Gala   “So here’s to Ireland.  Here’s to the United States of America.  Here’s to our shared heritage, and here’s to the confident, confident hope that the ties between our people and the Irish people will only grow and expand as the years go on to the betterment of our people and the world.”

January 17, 2017 U.S. Government Statement on Northern Ireland  The United States’ remains committed to supporting a more peaceful and prosperous Northern Ireland.  To this end, we urge all political parties to focus on quickly finding a way forward to the resumption of stable devolved governance.  We also encourage civil society leaders to continue their vital work building a better, shared future.

The 2015 Reports highlight the intensified global crackdown by an increasing number of states on members of civil society. Government efforts to stifle civil society were achieved through overt or direct means including through harassment, intimidation, detention, and restrictions on their ability to operate; through the implementation of overly broad counterterrorism or national security laws to control the freedom to assemble and to suppress dissent; and through more nuanced yet burdensome bureaucratic procedures such as the passage of NGO legislation that restricts the operating space for human rights organizations. The collective result of these measures has led to the silencing of independent voices, a growing impoverishment of political discourse, and diminishing avenues for peaceful expression and change.

11 March  2016  Global Entry to Benefit Travelers from Northern Ireland   A new initiative launched by United States Customs and Border Protection  will allow pre-approved, U.K. passport holders to gain expedited clearance upon arrival in the United States.  Speaking about the initiative, Consul General Daniel Lawton said: “The United States is a popular destination for Northern Ireland business and vacation travelers.  This program can facilitate and boost travel between our two countries.”    Currently available at 46 U.S. airports and 13 preclearance locations, streamlines the screening process for trusted travelers.  As an added benefit, Global Entry members are also eligible to participate in the TSA Pre expedited screening program.