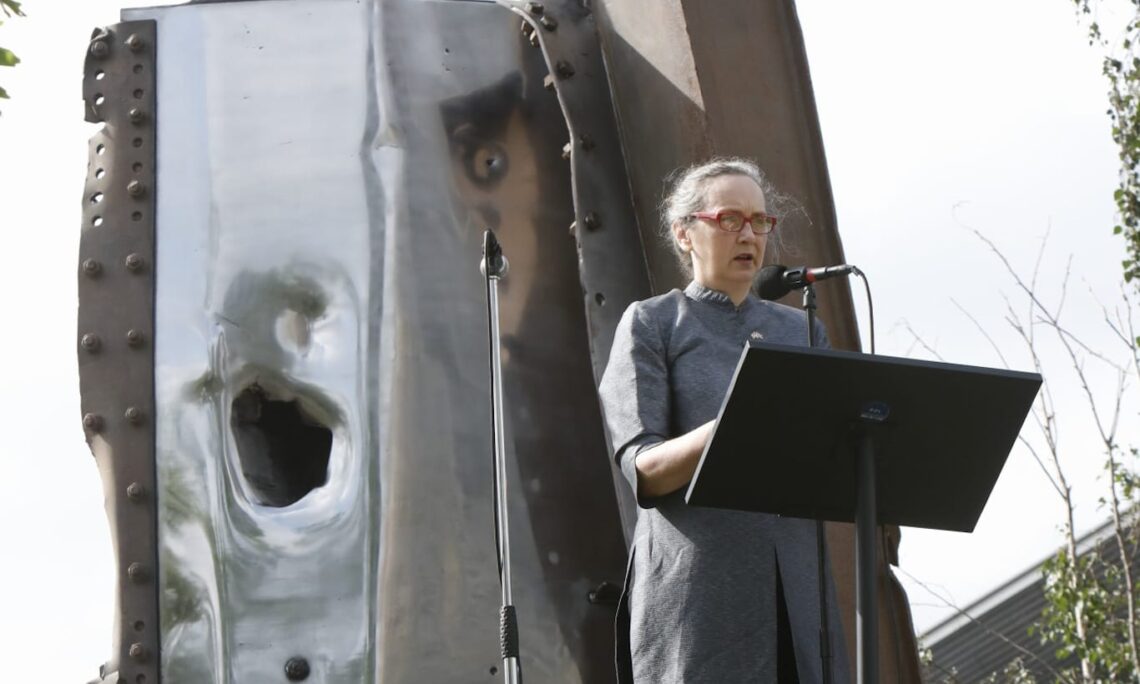 As an American, it is difficult to put into words how profoundly moving it is to be in the United Kingdom on this day, and to stand alongside America’s most steadfast of friends, as we commemorate, together, that harrowing moment twenty years ago, when so many lives were lost or changed forever.

Today, if you go to New York City and visit the site where the Twin Towers once stood, you will see a powerful and poignant message.

“No day shall erase you from the memory of time.”

How true those words are.

Twenty years may have passed, but our memory of the people we lost that day will never fade.

Because they are stories not only of loss, but of love…and of strength, and of bravery, and of hope.

This is why we will always share their stories, from one generation to the next.

And I want to express my sincerest gratitude to the British organization “Since 9/11”, for all the work they do in that regard: Going into schools, and sharing the lessons and perspectives of 9/11 with a young generation of Brits who weren’t even born at the time.

How important their work is, and how revealing it is of that deeply special bond between the British and American people.

In America, we made ourselves the promise to never forget.

Here in Britain, you are making sure that you won’t either.

Because both our countries lost so much that day.

In total, there were two thousand, nine hundred and seventy-seven people who died from over ninety different nations.

After America, no country lost more than the United Kingdom.

And today I want to pay special tribute to each of the sixty-seven British citizens, and to all their friends and family – some of whom are here with us today.

I want to take this opportunity to offer my deepest condolences to all of you on this anniversary of your tragic loss, the pain of which I know will always remain.

I also want to take this opportunity to pay tribute to the British public, who stood shoulder to shoulder with the American people in our worst of moments, with an outpouring of sympathy and support across the Atlantic which was simply unprecedented.

I will always remember the story Condoleezza Rice told about the difficult days that followed immediately after 9/11.

She said she came home from work, two days after it happened, completely exhausted.

She turned on the television, and on the news, she saw a clip of the Coldstream Guards.

It was the Changing of the Guard at Buckingham Palace.

And on the orders of Her Majesty The Queen herself, they were playing “The Star-Spangled Banner” in front of thousands of members of the British public, who had gathered together, waving American flags in solidarity.

When she saw this, well – that was the moment, Dr. Rice said, when she finally broke down and wept, for the very first time.

This is how much the special relationship between our countries means to us.

And it is touching to see that today, once again on the orders of Her Majesty The Queen, you played our anthem outside Windsor Castle.

What we have is the truest of friendships, and that is perhaps never more apparent than on the most difficult days of all.

In Manchester, London, Boston, or Orlando…

When we face the toughest of times, we always face them together.

That is why it means so much to me, and to any American, to be here in the United Kingdom on this difficult day.

I am humbled to speak on behalf of the United States today to honor the true and enduring friendship you have always shown us, not only in the best of times, but in the very worst as well.

For that, the people of the United Kingdom will forever have my country’s – and my own – deepest gratitude.