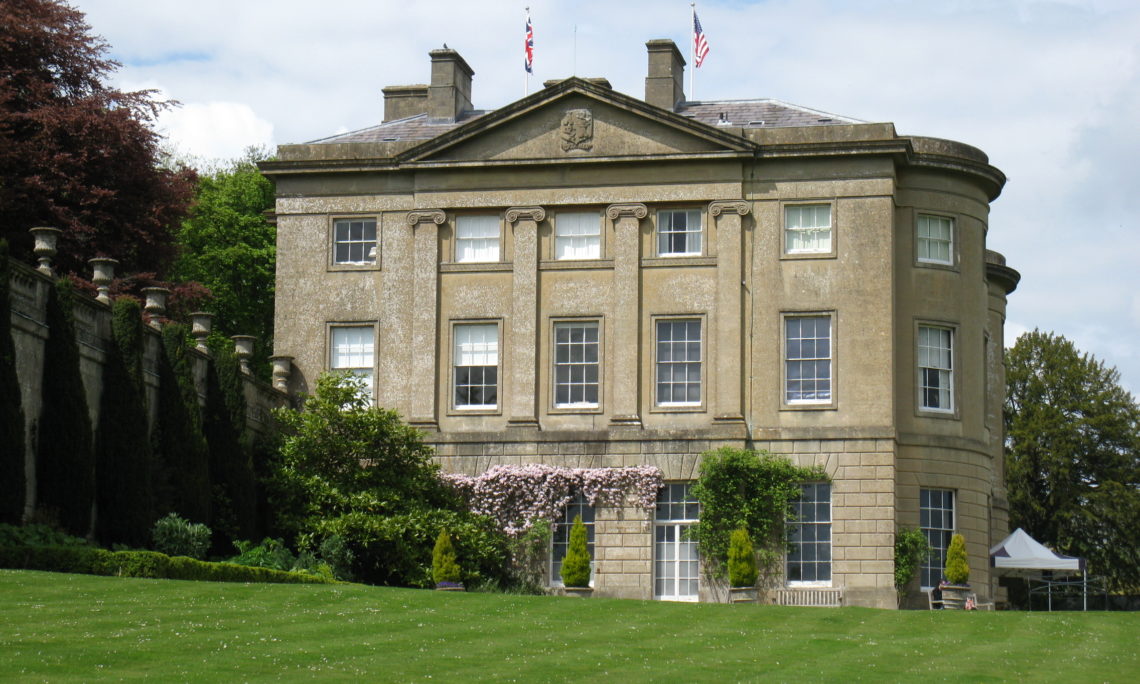 The following sites of interest are located around the Greater London area.

Other areas of interest include :

Among the artifacts in this large Church is a monument honoring President Abraham Lincoln. For information about the Church visit:   www.hingham.org.uk
Address: St. Andrew Church, Hingham, England

The American Air Museum is a memorial to the American airmen who were stationed in UK bases during WWII, Korea, Vietnam, Libya, and Iraq. The Museum houses the largest collection of American warplanes outside the United States. For ticket information and hours visit www.americanairmuseum.com

The American Museum features a number of permanent and rotating exhibitions about the history of the United States. Some of the exhibits include a covered wagon, American Indian artifacts, and the Mount Vernon inspired Gardens. Information on the current exhibitions can be found at the museum website at www.americanmuseum.org
Address:    American Museum in Britain, Claverton Manor, Bath, BA2 7BD
Telephone: +44 (0)1225-460503

Many of the services held by the fathers of the Pilgrims were held at All Saint’s Church, Babworth.
Address: Babworth, Retford, Nottinghamshire, DN22, UK

This church was where Roger Williams visited as a family chaplain and John Locke once lived. Roger Williams was an early settler of America and his views on the separation of church and state caused him to form the separate colony of Rhode Island. Political philosopher John Locke was one of the great thinkers of the Enlightenment whose works greatly influenced the American revolutionaries.
Address: High Laver, Ongar, Essex CM5, UK

The Benjamin Franklin Trail follows Benjamin Franklin’s time in England. The Trail begins in London but includes a number of sites outside of the London area such as his ancestral home in Ecton, a house in Hampshire where he wrote his autobiography, and a site where he did some of his pioneering scientific studies.
For information on the trail visit: www.benjaminfranklinhouse.org

Brookwood houses 468 American military dead on 4.5 acres. The graves are white marble and surround a chapel that lists the names of 563 of the missing soldiers.

More information about visiting the cemetery is at:  www.abmc.gov
Address: Brookwood, Surrey, England

The cemetery lies on 30.5 acres donated by Cambridge University and includes the remains of 3,812 American servicemen and servicewomen.
Over 5,000 names are listed on the Table of the Missing.  Most of these servicemen died during the Battle of the Atlantic or in aerial missions over mainland Europe.

More details about the Cemetery are at www.abmc.gov

Bull House was the home of Tom Paine from 1768-1774. Paine is most famous for writing the pamphlet Common Sense that helped to rally support for the independence movement in revolutionary America. Thomas Paine was considered a radical in his time and therefore spent much of his time outside of the United States although he eventually returned before his death. Paine was a deist and an early advocate of the abolition of slavery, free public education, and a minimum wage.
Address: Lewes, East Sussex

The Carpetbagger Aviation Museum was built in 1993 to commemorate the 50th anniversary of the US Air Force’s 801st / 492nd Bomb Group. The museum pays homage to the USAAF’s work in Operation Carpetbagger, missions designed to deliver supplies to resistance groups in Occupied Europe. The museum website is: harringtonmuseum.org.uk
Address: Sunnyvale Farm Nursery off Lamport Road, Harrington, Northamptonshire, NN6 9PF

B-24 of the 492d Bomb Group from Harrington Airfield, England, on a mission over Nazi Occupied Europe. (Image from the U.S. National Archives via the United States Air Force Historical Research Agency, Maxwell AFB Alabama)

The Museum commemorates the men and women, American and non, who fought in Operation Overlord (D-Day) during WWII. Museum schedules can be found at https://theddaystory.com/
Address: Clarence Esplanade, Southsea, PO5 3NT

The Epworth Old Rectory was the boyhood home of brothers John and Charles Wesley. John Wesley is the more famous brother due to his travels across America that led to the creation of the Protestant denomination of Methodism. Methodism is distinguished from other Protestant denominations by its Arminian tendencies. Importantly, John Wesley did not want to split from the Anglican Church, instead wanting to reinvigorate the Church members. His brother Charles is best remembered for his hymns that are widely used in Methodist services even though his religious views were not the exact same as his brother. More information on the Rectory is at: www.visitlincolnshire.com
Address: 1 Rectory Street, Epworth, Doncaster, North Lincolnshire, DN9 1HX

Grafton Underwood Airfield was one of the most important Air Force bases in the UK during WWII. Included in the divisions stationed here was the 8th US Army Air Flying Force. While much of the airfield no longer exists, a few building remain in addition to a memorial to the 8th USAAF.
Address: 4 miles Northeast of Kettering

Jefferies Farm is the ancestral home of President Jimmy Carter. The Farmhouse is still standing and can be viewed by the public. More information at: www.hertfordshire-genealogy.co.uk
Address: Chipperfield, Kings Langley, Hertfordshire, WD4

This Kennedy memorial in Runnymede was built in honor of the President and is also the site where the Magna Carta was signed. A number of other memorials are also on this site in honor of WWII veterans and the Magna Carta.  Please see the website of Historical England for details.
Address: North Lodge, Windsor Road, Old Windsor, Berkshire, SL4 2JL
The John F. Kennedy Memorial in Runnymede.

This meeting house held the early meetings that lead to the founding of the Quaker denomination. On this site William Penn, founder of Pennsylvania and leader in the Quaker denomination, and family are buried. Hours of operation are listed at: http://www.visitbuckinghamshire.org
Address: Welders Lane, Jordans, Beaconsfield, Buckinghamshire, HP9 2SN

Kiplin Hall was built by George Calvert, who secured the charter to found the first colony in Maryland, and whose son led the establishment of that colony in 1634.

The Hall features the story of the Calvert family in the Hall. The building is Grade I listed.

Lamb House was the home of author and literary critic Henry James for almost twenty years. It is preserved by the National Trust and includes a number of James’ belongings. Information can be found at the National Trust website.
Address: West Street, Rye, East Sussex TN31 7ES
Lamb House

Leeds Castle has a number of historical ties to America. The Castle was home to the Governor of Virginia Sir Thomas Culpeper and his descendants including George Washington’s friend the fifth Lord Fairfax. Visit their website for viewing information: www.leeds-castle.com
Address: Broomfield, Maidstone, Kent ME17

The memorial commemorates the Pilgrims departure in 1620. The Pilgrims, a group of religious Puritan’s had fled England first to the Netherlands and then the United States, eventually arrived in present day Massachusetts founding Plymouth.
Address: Southampton City Center across from Mayflower Park

While preparing to leave England with husband Mr. John Rolfe, Pocahontas fell ill and was brought ashore at St. George’s Church, Gravesend where she died and was laid to rest. Pocahontas had arrived in England from Virginia and became an attraction to the British public as an example of a nonwhite person who could live in high society. In 1896 a memorial tablet was built in her memory.
Information about the Church is on their website: www.stgeorgesgravesend.org.uk
Address: Gravesend, Kent, DA12 1LH England

Captain John Smith, one of the founders of Jamestown and earliest settlers of America has a rich history throughout Lincolnshire, England. It is possible to trace much of his life and family heritage throughout the area. The trail makes for an exciting day trip through an often neglected area of England.

John Winthrop, the founder of Boston and twelve time Governor of Massachusetts Bay Colony was married in this church. Winthrop arrived in America in 1629 with a group of Puritan settlers. A stained glass window in the Church remembers his life a contributions to America.
Address: Great Stambridge, Stambridge, Essex, UK

Sutton Harbor was one of the locations where the Pilgrim’s departed from England. Many other famous figures have also passed through the harbor including Pocahontas, Sir Francis Drake, and Captain James Cook. More information about the Harbor is at: www.plymouthbarbican.com
Address: 3-5 The Barbican, Plymouth

The Town of Thetford is Thomas Paine’s hometown. Paine is most famous for writing the pamphlet Common Sense that helped to rally support for the independence movement in revolutionary America. Thomas Paine was considered a radical in his time and therefore spent much of his time outside of the United States although he eventually returned before his death. Paine was a deist and an early advocate of the abolition of slavery, free public education, and a minimum wage. Explore the town to find his statue and his grammar school that dates from the 12 century.
Address: Norfolk, England, UK

The RMS Titanic left from Southampton with a crew of mainly Sotonians and many prominent Americans destined for New York and is remembered with a number of sites in Southampton including this large memorial.
Address: Town Quay, Southampton, Hampshire, SO14 2NY

Disclaimer
This listing of events, performances and other activities is for information purposes only and does not constitute an endorsement by the U.S. Embassy. All opinions expressed by the artists, writers, and performers participitating or contributing to the events listed are those solely of the participants and contributors and not of the United States Government or its designated representatives. Listing information is believed to be correct at the time it is listed but the U.S. Embassy accepts no liability for subsequent changes to these details and no reliance should be placed upon them.