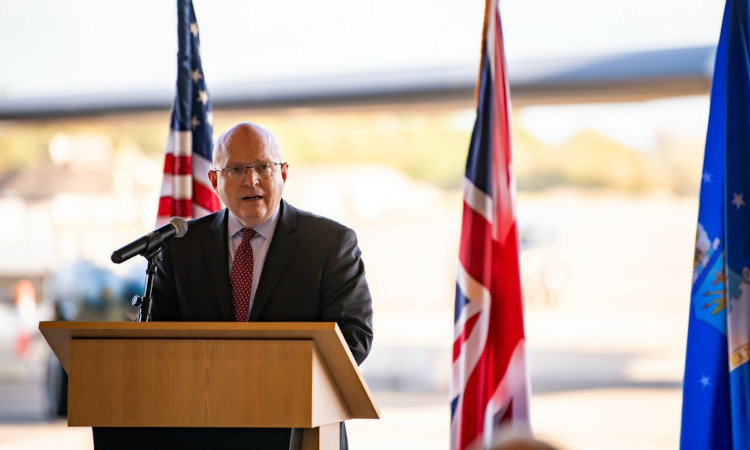 So I want to take this opportunity to thank the RAF and our UK partners more broadly for everything you bring to this special partnership between us.
Including, of course, your support for this deployment of the U.S. Air Force Bomber Task Force here in the UK over the next few weeks.

What an honor it is to get a front-row seat on the extraordinary work being performed here by the men and women of the 9th Expeditionary Bomber Squadron, all the way here from Dyess Air Force Base in Texas.

Thank you to every one of you – not only for taking the time to show me around today and explain the details of your mission here but also for the work you do every single day in the service of the peace and prosperity and security both of America and our allies.

This is actually my first visit to RAF Fairford but having served for a number of years as the Civilian Deputy at the U.S. European Command, I arrived here today already fully aware of just how important this base is – and indeed always has been.

I think it’s really quite informative to think about the history behind this airfield, which was first built in 1944 in preparation to carry British and American troops to Normandy for the D-Day landings.  Since then, we’ve had American bombers stationed here throughout the Cold War, through the Gulf War, through the war in Iraq.

And the fact that almost 8 decades after it was first built, we’re still here conducting exercises from RAF Fairford, with Americans and Brits working together in defense of each other, and in defense of our NATO allies….well, that really says everything you need to know about this enduring special relationship between our two countries.

And there really is no relationship like this anywhere else in the world.  I know that we diplomats are known for equivocating and sitting on the fence sometimes, but this I can say with total certainty:

Even though the U.S. has many valuable allies, our closest defense partner in the world is without a doubt the United Kingdom.

This is a country which shares our democratic values. It’s a country with an incredible base of world-leading universities, top research institutions, and cutting-edge companies.

And it’s a country which commits to its defense, and to our collective defense under the NATO alliance – including just recently through the announcement of the largest increase in defense spending in thirty years. That’s what makes the UK such an incredible security partner and that’s why we have built the highest level of trust, interoperability and collaboration together.

So I want to take this opportunity to thank the RAF and our UK partners more broadly for everything you bring to this special partnership between us.
Including, of course, your support for this deployment of the U.S. Air Force Bomber Task Force here in the UK over the next few weeks.

Missions like these are of the highest strategic importance.  This is about us strengthening our co-operation and interoperability with allies and partners.
It’s about us maintaining our readiness for combat.

And it’s about us demonstrating that readiness in order to deter potential adversaries and show that our forces are capable of operating anywhere, anytime, to meet any challenge decisively.

So I want to thank everyone here – both on the U.S. and UK side – for being a part of this mission and for all that you do to protect the peace and security of our country and our allies.