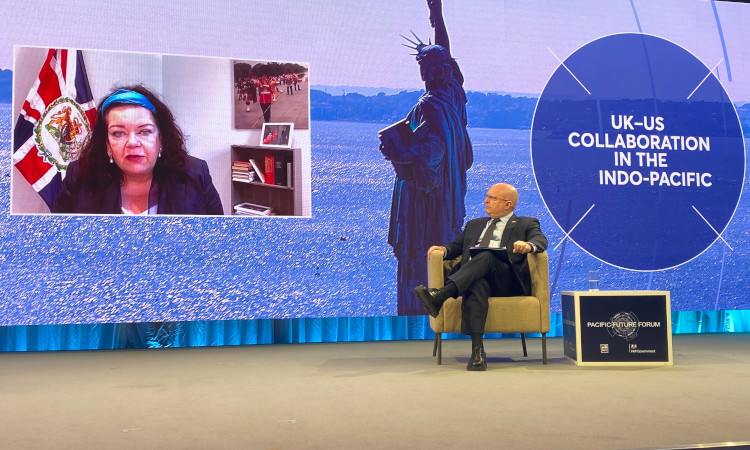 (As delivered)
Chargé d’Affaires Reeker:  Thanks, Samira, and thanks Karen, terrific to see you from here from your country, while you’re there back holding the fort in mine. Thanks to all that have organized this Forum both from the government side, the military, and the private sector as well. It represents the best of what we need to do in working together in addressing these key issues.

A special thanks of course to the Royal Navy for welcoming us on board the HMS Prince of Wales. I had the great honor of discussing the Sustainable Markets Initiative last night with the Prince of Wales himself and John Kerry, and now to be on the Prince of Wales, the ship, is another important step in this.

Sharing a screen with Karen I think is absolutely appropriate here. It’s very fitting that we are linking up with this. We were incredibly linked up when I was in my previous capacity as Assistant Secretary of State for Europe, working with all 50 countries under the European Bureau in the State Department. Of course, the relationship with the United Kingdom involves just about every aspect of what we do in diplomacy, in defense, in commerce. So, when it comes to our approach to security in the Indo-Pacific, as you’ll have heard from Admiral Aquilino – or frankly anywhere, including of course the Transatlantic – the first thing to say is that diplomacy is by far the first and most important tool that we have.

I think you’ve all heard President Biden most recently at the United Nations General Assembly talk about his focus on an age of relentless diplomacy. In Karen, I have a relentless partner! We are dedicated to relentlessly tackling the huge issues of the day, which include of course the climate crisis, defending our prosperity and security, and showing that democracy delivers these inflexion points that President Biden had talked about that are upon us. The only way to address these challenges of the 21st century is together.

Let me just talk about three general ways we do that, the three Ps. That would be partnerships: obviously as referred to the U.S., we’ve heard from the first day of the Biden administration he’s focused on revitalizing our partnerships and alliances in the Indo-Pacific, but also globally. You can certainly see two key examples with the United Kingdom.

The New Atlantic Partnership which was signed by the President on his first international visit, which was by no coincidence to the United Kingdom back in June — a bilateral visit that took place before the G7 summit meeting — which I think represented so keenly what President Biden set out to do in the first months of his administration on a foreign policy angle.

Karen has already mentioned of course AUKUS bilateral agreement that includes Australia, which deepens security cooperation specifically from the Indo-Pacific region. But we’re able to do that partially because we’ve done so much for our Transatlantic relationship, which gives us a strong basis. We have to be able to work in all theatres to deal with these challenges.

Thirdly, preparation. It’s important that we turn our cooperation agreements into practice, into interoperability, a top priority for security.

I was just yesterday, another beautiful sunny day over in Gloucestershire at RAF Fairford where the U.S. Bomber Task Force is visiting from Texas to practice integrating with UK and NATO allies in strategic areas including the Arctic, the Black Sea and the Baltic. We can really be confident, I think, in our Indo-Pacific focus as I said because we’ve done so much to revitalize our Atlantic partnerships, including through NATO.

The third P is private sector. The President, the Secretary of Defense and the Secretary of State, whom we’ve linked in, are all highly focused on being prepared not only for the battles of today, but the battles of tomorrow. To do that, we’ve got to leverage the power both in terms of finance but also innovation of the private sector and face the rapid pace of 21st century technological advance.

A key part of the success is working closely with those private sector companies. About a month ago, I was at the DSEI last month – mid-September I guess – meeting with U.S. and UK companies that are involved in the defense sector.

Again, it’s so important that we’re able to meet in person once again after the break of the pandemic. As I keep saying: diplomacy itself is a contact sport. We have to have that direct one-on-one engagement. But the US and UK companies really are at the forefront of meeting global innovation and developing the next-generation capabilities that will give us the edge, whether in the Indo-Pacific or Transatlantic or any other part of the world.

This is what we really lies, I think, at the heart of our success; the ability to coordinate, to cooperate, to collaborate across borders, to protect ourselves and protect each other. I see that every day from what is in so many ways our European flagship Embassy here in London. I’m delighted to again be here – particularly with Karen; we work so closely together in pursuing this incredibly important partnership.