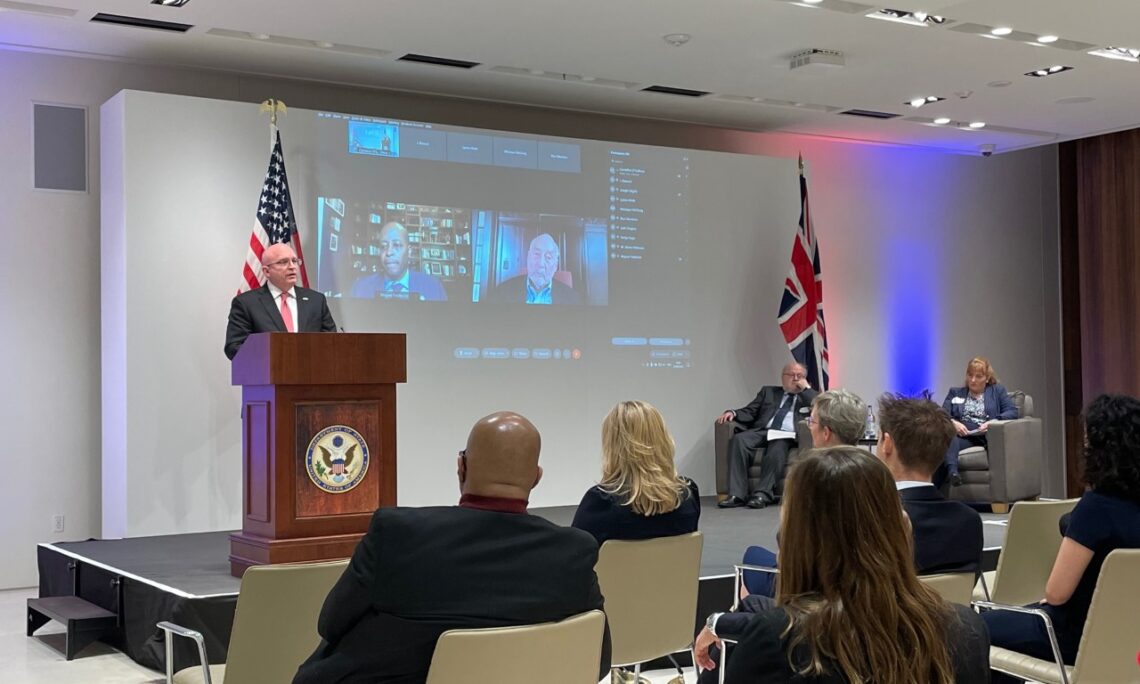 (As prepared for delivered)
Chargé d’Affaires Reeker: Thanks Christina– and thanks to all of you for joining us this evening.

After so long apart, it is so heartening to see many of you here in person.

Diplomacy, much like education, is I believe, very much a contact sport and it’s great to be getting back to it.

And it is a privilege for us to host so many leaders of such august institutions all in one place.

And speaking of august institutions, I have to start by talking about the Fulbright program itself, which after 75 years has become such an important fixture in the global academic community.

And I can’t help but think back to why it was first founded in 1946, after the two deadliest wars in human history, just a generation apart. The Fulbright program of exchanges was founded then with a mission to connect and bridge divides and build greater understanding.

75 years later, we live in a world in which division is growing at a time when global collaboration is the most critical it’s perhaps ever been.

President Biden at the UN, in the Oval Office has spoken of this era as an inflection point – climate change, democracy vs autocracy, racial justice.

So if ever there were a time when we needed to remove obstacles to learning and understanding and collaboration across borders, it is now, which means the value of an organization like Fulbright really cannot be understated.

And I’ve seen throughout my time in the State Department – over the course of almost 3 decades serving in various regions across the world – the effectiveness of what Fulbright does. Whatever country it is – and Fulbright operates in over 160 countries – the caliber of individuals is really unparalleled.

And that’s evidenced by the success of what they go on to do. I think there have been 60 Nobel Laureates. 40 Heads of State.
And among the 400,000 alumni are top academics and leading decision makers in every single country.

But I want to pay a special tribute to the U.S.-UK Fulbright Commission, because as in every other aspect of the US-UK relationship, this Commission really is very special. I take my hat off to Sara and Maria and the full team who do such an amazing job to bring the full diversity of both our countries together to solve the big global challenges we face.

And what is so impressive about this Commission is that it’s consistently looking at what more can be done – how can connections be built and strengthened between more students, more universities, more alumni.

Whether it’s working with the Sutton Trust to help talented young Brits from disadvantaged backgrounds go to American universities. Or creating Summer Institutes at UK universities for Americans who’ve never even been abroad before.

Or the new Global Challenges Teaching Awards, set up to focus on the issues of our era – pandemics, climate change, racial justice – and which will pair up teaching professionals and their universities across the Atlantic to devise and teach a course together.

Fulbright U.S.-UK is constantly looking for new ways to make a difference and create communities and build bridges – not only between individuals, but also institutions – and you all really are to be enormously commended for that. Thank you for everything you do.

I also want to thank all of the UK leaders representing Universities here tonight.
Not just for being here, but for all you do to connect with the academic community in the U.S. and to facilitate and strengthen transatlantic research and collaboration.

We place tremendous value on the academic partnership between our countries.

The U.S. could not wish for a closer or stronger academic partner than the UK.

This country’s research is simply world leading – I think of the Jenner Institute at Oxford which helped develop the vaccine, or the Grantham Institute on climate change at LSE which I met earlier this week.

It’s really no wonder that this is the top destination abroad for U.S. students – 40,000 of the best brains in America want to come and study here, just as thousands of Brits choose to come to the States.

So thank you for all you do to support American universities and students and also the various ways in which you support Fulbright U.S.-UK.

And indeed, the same goes to all the other important partners of Fulbright who are here tonight.

I also want to thank our panel – with a particular thanks to UK International Education Champion Sir Steve for chairing this discussion tonight.

And I want to thank those joining us online from the U.S.

We are so honored to hear from you today. First, Professor Joseph Stiglitz – I don’t know if it’s possible to be a rockstar economist, but if it is, that title is most certainly his.

He is an economist of legendary status – a Nobel Prize Winner in Economic Sciences.

He is now a Professor at Columbia, as well as an honorary Fellow at Cambridge, and more universities than I have time to mention.

But most importantly of all, Professor Stiglitz is himself a Fulbrighter, having studied in the UK, many moons ago.

And when we talk about the effectiveness of the program, I would call Professor Stiglitz’ achievements exceptional, were it not for the fact that he was preceded by Milton Friedman, who was also a Fulbrighter in the UK and won the same Nobel!

Second, we also have the honor of having with us tonight Dr Wayne Frederick, the President of one of America’s finest institutions, Howard University, which boasts some of the greatest alumni in American history – from Thurgood Marshall to Stokely Carmichael, Toni Morrison – and, of course, our current Vice President, Kamala Harris.

And I want to take this opportunity to congratulate Dr Frederick on his appointment last year to the prestigious role of Charles R. Drew Professor of Surgery.

It is worth pointing out that Charles Drew is someone we hold in great reverence in this Embassy, as a true hero of the Special Relationship.

It was Dr Drew, of course, who is known as the father of the blood bank.

He learned how to store, and therefore, transport blood plasma – and just in time, because soon after – when the Battle of Britain was in full flow – the US Government then put him in charge of what was called the Blood for Britain project to send blood to the UK to save the lives of citizens and soldiers injured in the Blitz.

And thanks to Dr Drew’s efforts, and the New Yorkers who queued round the block to donate, countless lives were saved then – and throughout the war and of course, beyond – to this very day.

So it is very much in keeping with Dr Drew’s legacy, that Dr Frederick continues to build vital and important bridges across the Atlantic, including by taking part in today’s conversation.

Thanks to you all.