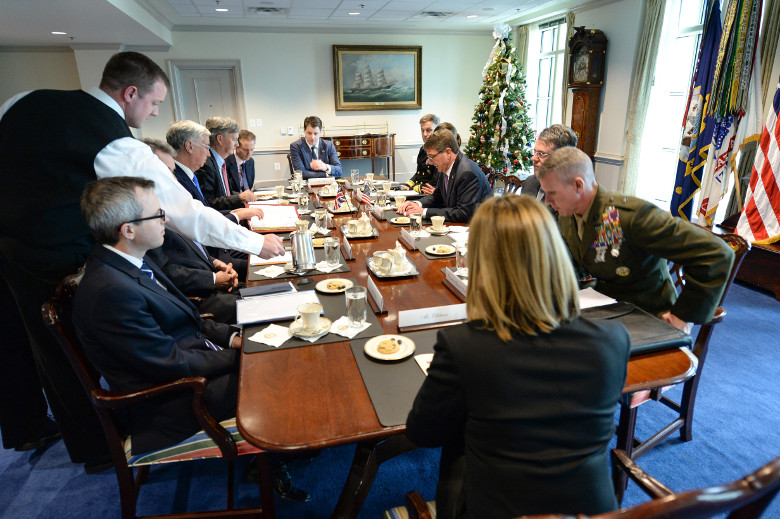 The United Kingdom is a strong partner in the fight against the Islamic State of Iraq and the Levant, and will help bring about the eventual defeat of the terror network, Defense Secretary Ash Carter said today.

Carter spoke at the Pentagon in a joint press appearance with British Defense Secretary Michael Fallon.

The United States “has no better friend or ally” than Britain, Carter said, adding that the U.K. has been involved in the counter-ISIL coalition since the beginning of the campaign in September 2014.

“With strong allies like the United States and the United Kingdom bringing to bear every instrument of national power against this barbaric foe, we will defeat ISIL and we will ensure that they stay defeated,” Carter said.

He lauded Britain’s efforts in the fight, saying it has provided significant contributions to air operations, including military strikes against ISIL targets in Iraq, and intelligence, surveillance and reconnaissance missions in both Iraq and Syria.

“British soldiers have provided robust support for the coalition’s partners on the ground, advising, assisting and building the capacity of local forces who are taking the fight to ISIL in both Iraq and Syria,” Carter said.

The U.S. defense secretary welcomed last week’s vote in the House of Commons to approve British participation in strikes on ISIL targets in Syria. That move, he said, “provides further evidence of the enduring importance of our partnership.”

The vote, according to Fallon, extends the already robust British involvement in the fight.

“The decisive vote in our parliament last week to strike [ISIL] at its heart in Syria was an important moment in this campaign,” he said.

Britain, Fallon said, is already providing some 60 percent of the coalition’s entire tactical reconnaissance and up to a third of the precision strike capability.

“The vote last week means that we can now treat this as one theater and use our expertise against [ISIL] in its heartland,” the British secretary said.

“We have brought more planes to the region, and we have more than doubled the number of missions that we fly by day and by night,” he added.

In addition to the fight against ISIL, the United Kingdom has been a strong partner in many other areas, Carter said.

“The multiple fronts where the United States and the United Kingdom have stood shoulder to shoulder over the past year — whether in deterring Russia, containing Ebola or confronting ISIL — make it perfectly clear this is indeed a special relationship,” he said.

The two countries, Carter added, must “continue writing a new playbook for deterrence and defense” in Europe. That includes strategies to counter new challenges such as cyber and hybrid warfare.

“And we must continue to adjust, both our posture and our presence, in response to Russian aggression and to support our allies,” Carter said.

Carter also welcomed the UK’s release of its strategic defense and security review, a blueprint for British security priorities through 2020. “At the Department of Defense, we wholeheartedly welcome the strategic depth and insight of this review and look forward to working with our British allies in making it a reality,” he said.

(This article originally appeared on the Department of Defense website)