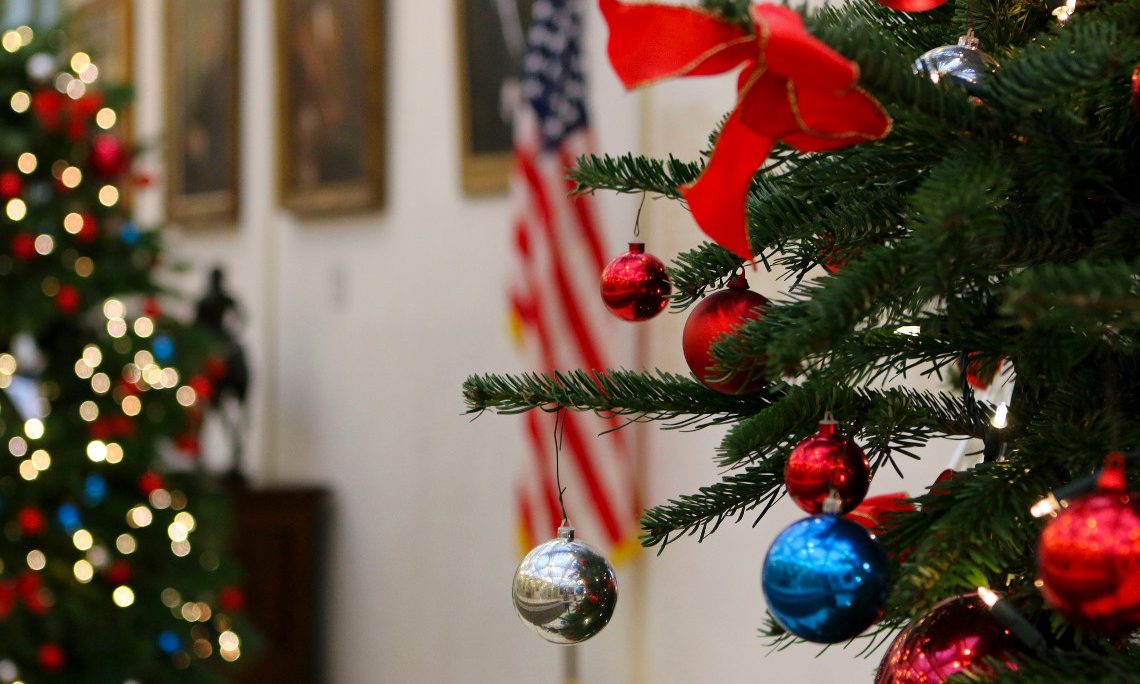 Christmas, celebrated by most Christians on December 25, commemorates the birth of Jesus of Nazareth. Americans, like many of the world’s peoples, have developed their own Christmas traditions and observances, and these have changed greatly over time.

Today, most Americans blend religious and secular customs with their own family traditions, often incorporating food, decorations and rituals from places they or their ancestors once called home. Roast turkey and ham are popular for Christmas dinner throughout the country, but depending on the region, so are tamales, roast goose with red cabbage, crawfish jambalaya, roast pork or “seven fishes” seafood salad.

In the Southwest, luminarias — lanterns made from brown paper bags weighted down with sand and illuminated by a lit candle — are displayed on Christmas Eve. Many Mexican Americans celebrate Las Posadas, a procession that re-enacts Mary and Joseph’s search for a place to bed down in Bethlehem. Swedish Americans hold St. Lucia festivals, and in Puerto Rico there are parrandas, where friends go from one house to the next singing traditional songs, “surprising” their friends and waking them with their music.

Even though Christmas is for many Americans a religious occasion, the federal courts have upheld its status as a legal holiday. As one court reasoned, “by giving federal employees a paid vacation day on Christmas, the government is doing no more than recognizing the cultural significance of the holiday.”

To some extent, non-Christian holidays celebrated at roughly the same time of year as Christmas — most prominently the African-American Kwanzaa and the Jewish Hanukkah — also blend into a broader “holiday season.”

DEVELOPMENT OF THE AMERICAN CHRISTMAS

The early New England Puritans frowned on boisterous Christmas celebrations. In 1659, the Massachusetts colonists briefly criminalized observance of the day, and Christmas remained a regular workday in much of New England and Pennsylvania. Other parts of British North America, however, celebrated with gusto, with costumed revelers going door to door and receiving small gifts of food and drink.

The modern, commercialized Christmas began to emerge in the 19th century with the new custom of purchasing gifts for young children. Seasonal “Christmas shopping” began to assume economic importance.

Other Christmas traditions similarly began during the 19th century. Santa Claus — derived from the Dutch Sinter Klaas and the German Saint Nicholas — assumed the persona of a jolly dispenser of gifts and pilot of a reindeer-drawn sleigh through such works as the 1823 poem “A Visit from Saint Nicholas.”

Germany is credited with starting the tradition of Christmas trees in the 16th century. According to legend, the Protestant reformer Martin Luther first added lighted candles to a tree to remind his children of the wonders of God’s creation. Christmas trees became popular in Britain and the United States in the 19th century. Today, many Americans purchase a fresh evergreen tree or a reusable aluminum and plastic model and decorate it with lights and ornaments. In some families, Christmas gifts appear under the tree on the morning of December 25, deposited there by family members — or, as small children believe, delivered by Santa Claus after he lands his reindeer and sleigh on the roof and comes down the chimney.

Mass-produced Christmas cards began to appear in the last quarter of the 19th century. Today, these might depict religious scenes or convey secular, often humorous, messages. On the Internet, electronically transmitted “e-cards” are increasingly popular; nonetheless, Americans will mail some 16.6 billion Christmas cards, letters and packages over the holidays.

With Christmas shopping vitally important to some retailers, Christmas has expanded into a “season” of its own. The day after Thanksgiving (the fourth Thursday in November) is now known as “Black Friday.” An important shopping day, it pushes some businesses into profitability, or “in the black,” and can account for a substantial proportion of annual profits.

But this extended Christmas season is about far more than shopping. For many Americans, it is a period of general goodwill and an occasion for charitable and volunteer work.

As for seasonal entertainment, there are countless productions of Tchaikovsky’s Nutcracker ballet, school holiday pageants, and carolers everywhere. On television, adults watch old favorites like A Miracle on 34th Street (1945) and It’s a Wonderful Life (1946), while children (and nostalgic parents) enjoy classic animated programs such as A Charlie Brown Christmas (1965). Many radio stations adjust their formats to feature Christmas music. The holiday movie season is often called the “Oscar season” because so many hopeful contenders for the Academy Awards (or “Oscars”) are released in December.

Still, the holiday’s original religious meaning remains for many its most important element. Some congregations create manger scenes — dioramas of the stable where Jesus is believed to have been born, with figurines representing the infant Jesus and those present at his birth. Many churches hold Christmas Eve candlelight or midnight services. Some include a Mass of the Nativity or a dramatization of the birth of Jesus.

As with so many aspects of U.S. cultural life, Christmas in the United States reflects the values of a free and diverse people.

See “An Overview of U.S. Holidays” and photo galleries on Christmas and Winter Celebrations.