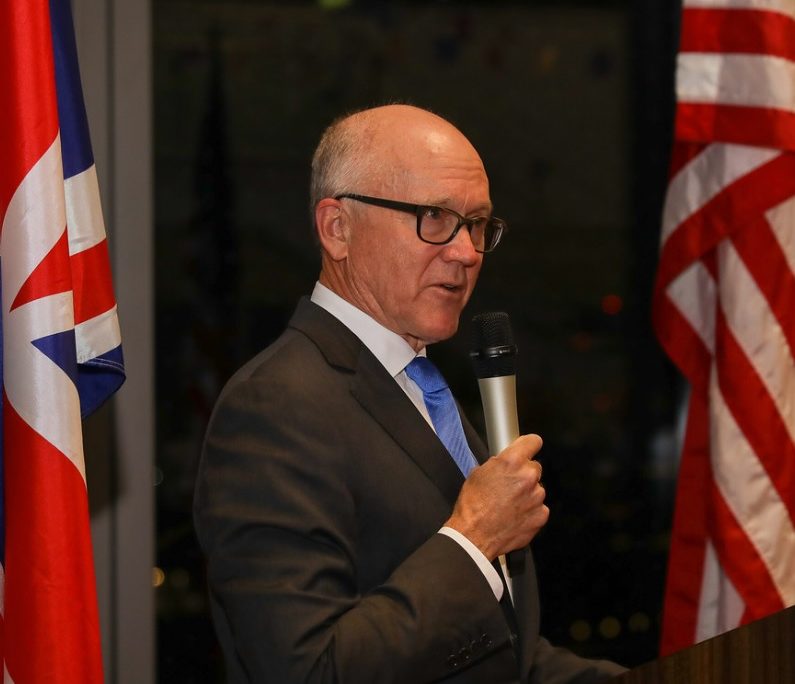 AMBASSADOR JOHNSON: War broke out in Europe in the summer of 1914.  “It will be over by Christmas,” they said.  But, of course, it wasn’t.

Over the next four years, the whole world was engulfed in war.  Many British men headed off to the trenches.  And young men from America boarded the boats to Europe.

Young Americans were joined by young Australians, Indians, South Africans… Many nations sent their sons to the front.  Many never came home.

Today, some of them rest here in Brookwood.  The simple white crosses are a testament to the unimaginable sacrifices they made.  In total, WWI claimed the lives of an estimated 16 million people.  It was the deadliest conflict in human history.

“It must never be allowed to happen again,” they said.  But, of course, it did.  Just twenty-five years later.

Once again, the whole world was engulfed in conflict.  Once again, British men were sent into battle.  Once again, young men from America and many countries boarded their ships.  Once again, many of them never came home.

This war was even more deadly than the last.  An estimated seventy-five million lives were lost.  We heard some of their stories this year, when we commemorated the 75th Anniversary of D-Day.

As President Trump said at the memorial in Normandy, their example will never, ever grow old.  He said:

“Your legend will never tire.  Your spirit — brave, unyielding, and true — will never die.  The blood that they spilled, the tears that they shed, the lives that they gave, the sacrifice that they made, did not just win a battle.  It did not just win a war.  Those who fought here won a future for our nation.  They won the survival of our civilization.  And they showed us the way to love, cherish, and defend our way of life for many centuries to come.”

Not for control or domination.  But in the fight for freedom and for peace.  We remember their sacrifices.

And today we say with renewed determination, that the horrors of war must never be repeated.  Europe’s peace was hard won.  We will not allow it to be threatened again.

We will follow in the footsteps of all those heroes who gave their tomorrow for our today.  We will keep doing whatever it takes to defend our peace, democracy and way of life.

And we will do it, as always, with America and Britain standing side by side.